The use of controlled levels of negative pressure application has been shown to accelerate debridement and promote healing in various types of wounds. This optimum level of negative pressure appears to be around -125 mmHg below ambient and there is evidence that this is most effective if applied in a cyclical fashion. Earlier studies used more conventional methods such as a wall suction apparatus or surgical vacuum bottles for creating the negative pressure. However, there were multiple problems present in the use of these conventional methods such as non-regulated pressure, high protein loss, cross contamination from infected patients, also the mobility of the patient was restricted.

Hence we introduced the commercial system for promoting negative pressure wound therapy also known as vacuum therapy, vacuum sealing or topical negative pressure therapy. This equipment called CCNPWT Wound Management system was designed to overcome the problems associated with conventional methods for the creation of negative pressure. The heart of the system is a microprocessor-controlled vacuum unit that is capable of providing controlled levels of continuous or intermittent sub-atmospheric pressure ranging from

The principle of NPWT involves extending the usually narrowly defined suction effect of drainage across the entire area of the wound cavity or surface using an open-pore filler that has been fitted to the contours of the wound. To prevent air from being sucked in from the external environment, the wound and the filler that rests inside or upon the wound are hermetically sealed with an airtight adhesive polyurethane drape that is permeable to water vapour, transparent, and bacteria proof. A connection pad is then applied over a small hole that has been made in the drape and connected to a vacuum source by means of a tube (Fig 1).

Two main theories prevail regarding the mechanism of action of NPWT used in conjunction with reticulated open cell foam:

NPWT acts in different ways to promote wound healing. The wound is subject to suction pressure that is propagated through the wound filler to the wound bed. This suction drains exudate from the wound and creates a mechanical force in the wound edges that result in an altered tissue perfusion, angiogenesis and the formation of granulation tissue. Some of the mechanisms of action have been demonstrated experimentally and clinically.

The effects of NPWT on open wound can be summarised as follows:

• Visually appealing dressing method due to clean, exudate-free dressing conditions even during mobilisation. 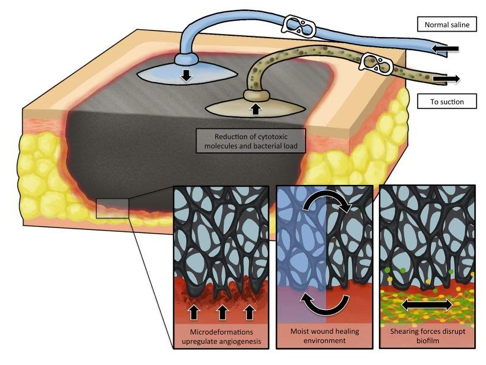 The use of negative pressure wound therapy